My digital fine art images have been specifically influenced by the artists of the French Impressionist period. At the suggestion of contemporary talented artists, I attempt to study the style and methodology of these artists and to replicate their works in digital – image format. For variety, I use other images of the historical master and sculptures – especially the works of Michelangelo, but the work of the men and women called Impressionists continues to influence my personal visual art portfolio. 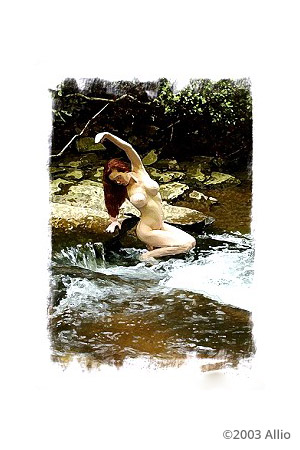 On April 15, 1874, twenty-nine artists gathered to present an exhibition in Paris, France, under the name of the group of the Société Anonyme des Artistes. It was the first of what would be eight shows by this collective over a period of ten years. Although intentionally anonymous, at the time, and a target of vicious attacks by traditionalist critics, the names of Renoir, Monet, Pissarro, and Cézanne now lead the list of Masters of Impressionism.

The name of the art style came from Impression, Sunrise a canvas by Monet. Originally intended to be a derogatory title for the non-traditional if not downright scandalous – for the period in which it was created – brushwork, the images of the Impressionist was a revolutionary approach – reflective of those revolutionary times – to the use of light, color and texture in artistic imagery.

The works of these Impressionism masters are a worthy artistic counterpoint to the realism of artistic modern photography. Both express the artist’s right to reflect upon and recreate a reflection of a given subject.

Many of these artists would begin with sketches or "studies" of an image before painting. In my digital rendition of an image, I begin with a photograph, then digitally enhance the figure study. The style approximates that of Pierre-Auguste Renoir, Edouard Manet or Edgar Degas – three of my personal favorites.

Freed from the bond of studio work, some Impressionists began to work en plein-air, or in situ, enhancing the works of an earlier generation of Dutch and English landscape painters. Most portraits and still life works continued to be produced in studios. Likewise, the concept of working outdoors is consciously reflected in my digital art work, which is then finished in my "electronic studio."

The model in Olympia was Victorine Meurent, a Salon-exhibited artist in her own right. The use of artists and photographers as models is a tradition that I strive to continue. Their invigorating chemistry, instinctual freedom, and intrinsic understanding enhances the artistic process.

In addition to oils, the masters used chalks, pastels, and charcoals on various surfaces in the development of their works. Camille Pissarro used crayons on canvas for his The Seamstress. Three Russian Dancers by Degas is an example of pastels on paper. Renoir’s Nude in Sunlight exemplifies contrasting brushstrokes in oil on canvas.

My decision to enhance the various processes of my craft by studying the styles of these Impressionists follows a long history of art instruction. Early students at the Louvre were expected to spend at least five years copying the techniques of a master artist with the expectation that these styles would be perpetuated in the student’s own work. Borrowing influences from other artists is a gesture of respect – un omaggio – to their skills and mastery.